All is well. Remain calm

So the storm blew in and out with a vengance. I've taken some photos but not that many. Mostly because I've been either working or sleeping. And I'm working in a cube which looks a lot like your cube and so it's not that exciting methinks.

So today I parked the car and walked into work, handed the keys to the guy I was relieving and he left an hour later. He came back in to tell me I had to come look at the car. It turns out this thing had been blown from it's parking space into the back of the rental car. 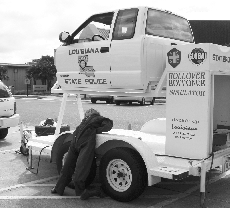 This is a file photo. I hope that some of the photos that my colleague took came out. This is a rollover simulator. Police put a dummy in the seat and then the car spins around with and without a seatbelt to illustrate the dangers of not buckling up. This trailer had pinned my rental car into it's spot while taking some paint off the bumper. I normally would find this very amusing that a trailer promoting driving safety had hit my car, but I remembered this exchange.


Smiley Guy at Enterprise counter: You want insurance on the car, Chief?*
Dumb Yankee: No. I have it on my credit card I think.


The one time. Bastards. I'll call Enterprise today after I get some more sleep. The hotel I'm in is probably still without power. Shaving in the dark can be a little challenging. I'm warning Hanna to back off and stay in the ocean where she belongs.


* For some reason here, a number of guys here have called me "Chief", "Boss", "Captain", and other terms. It's really odd. But not as odd as the habit of people calling women here "Miss" followed by their first name. As in "Oh, you need to talk to Miss Debbie." Strange I tell you.
Posted by Hero to the Masses at 6:16 AM