Time Difference is a Bitch

This morning I had a conference call that started at 9AM EST.  I, however, am on Pacific Standard Time.  Which means I had to get up at 6AM to take the call.  Good news is that I could wake up literally 5 minutes before and just grunt as they did roll call.  However my morning wasn't so peachy.

First, when I travel across time zones, I like to leave my Blackberry on EST, so I know what time my work is happening in.  It also lets me know when it's okay to stop responding to emails from people who don't know I'm on the West Coast.  My IPhone uses Apple magic to determine where I am and adjusts accordingly.  So I set the alarms on both my phones for around 6AM to make sure I made the call.  I'm sure you see where the problem is.  The Blackberry went off at 3AM, and in my sleep-deprived haze, I called in and waited on an empty conference line for about 5 minutes before I realized what I had done . Sonofabitch. 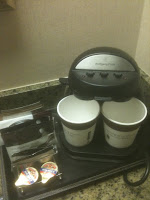 Then, when I was up and on the call, I was in desparate need of some coffee, but couldn't leave the room, because I didn't feel like getting dressed and I'm a lazy person.  So I used the coffeemaker in the room.  It looks like this.  As you can tell, it was made by Wolfgang Puck.  Well, that's a lie.  It was made in China by people who have no idea who or what a Wolfgang Puck is.  He just gave his name and got a check.  So I followed the Ikea-like directions on the front of it and brewed up a cup of coffee for my 90 minute call.  When the cheap plastic beast was done, it beeped and I went to get my coffee.  It looked dark enough.  I added some sugar and milk to guard against the possible poor taste and I took a sip.

It was godawful.  No, that's not strong enough.  It was fucking terrible.  It tasted like it was brewed through the socks of the Jets Offensive Line.  I'd never tasted warm feet before, but if they were made into liquid form, I'm pretty sure this experience would have covered it.  I couldn't take more than two sips, even though my need for caffeine was dire. I've been on road trips to New Orleans and Omaha through the night and stopped at Mom and Pop gas stations where they poured coffee that looked like pudding.  Drinking that sludge was like drinking that coffee that comes from the shit of rats ( well technically civets), compared to this coffee.  So damn you Wolfgang Puck.

You make me laugh out loud, and no, I won't write LOL. I refuse.

For not writing LOL, I salute you anonymous. I would hug you for your brave stand, if I knew who you were.