Why yes, there is someone on board who can fly this plane.

This morning, I experienced the marvels of flight.  From the cockpit. After my girlfriend's last surgery, she got me a Groupon for a "Discovery Flight" at the Washington International Flight Academy.  Given the types of planes they have, I'm not sure where the International comes from.  My guess is that most of the staff seems to be Israeli, so maybe that's it.

I spent 20 minutes on ground instruction, which consisted of a guy putting a laminated picture of the controls in front of us and walking through what they do.  Then it was off to the tarmac and the plane.  We were flying a Cessna 172, which is a single engine, 4-seater.  On the way out, I asked my pilot how long he'd been flying.  He said "3 months" and then we all laughed as he was joking.  He then said "No, just kidding.  Two years." Which I gotta tell you wasn't that much better.  But he was a nice guy.

So a few things about flying a Cessna.... 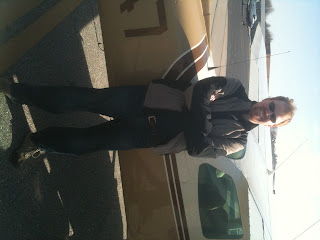 It was an awesome experience.  They give you a soft sell to getting your pilot's license when you land, which would cost probably around $5,000.  Which is about $4,950 more than I have right now.  But it might be cool one day.
Posted by Hero to the Masses at 1:54 PM