How much do you weigh? 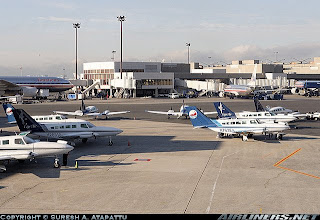 The above question is never a good question to ask. But it sends a special message when asked by the girl at the Cape Air check-in desk at Logan. If they want to know how much you weigh, rest assured you're getting on a small plane.

I flew up to Plattsburgh and back from Beantown this weekend to visit the folks and used Cape Air. They are currently the largest independent regional airline in the country and they have the largest fleet of Cessna 402s in world. The Cessna 402, pictured above, is a small plane. So small that you get to sit next to the pilot if you want, as there's only one. And you need to hold it on the 1 hour and 20 minute flight as there's no bathroom.

The whole thing is a little funny. It started on Friday as we're lining up to board and the pilot, Chaz, ran by and asked if we could wait as she had to use the bathroom. So you of course wait. It was obvious that many of the people on the flight are regulars as they knew her and were asking about her nights and weekend. She came back from the bathrom and then led us like a 4th grade class down to the plane.

The bags on the plane go in two places. Big bags go in the nose and the smaller bags go in the wing, behind the engine. Chaz actually opened the hatch which is like her window as she was taxiing around Logan to get more air into the plane. We took off in about 1/4 the space a jet would need and we were on our way.

One thing about small planes and getting to see out the front windows is you are a lot more attuned to the space around you. Going through clouds generally produces noticeable bumps, unlike larger planes. Another amazing discovery was the axes on the plane. Most people who fly commercially are used to two basic axes, pitch and roll. Pitch is what happens when your plane takes off and the nose points up. Roll is when you make those big banking turns and one wing dips low as you circle. However yaw was new for me. It was like the plane was climbing straight, but we were pointed at 10 o'clock. Here's a better explanation.

Overall it was a decent flight. A lot of turbulence on the way back. I hit my head several times on the top of the cabin, and I have a bump where I struck the reading light. And the French kid sitting across from the pilot got sick on the final approach. Always something going on when I travel.
Posted by Hero to the Masses at 11:18 PM