Made on Honor, Sold on Merit 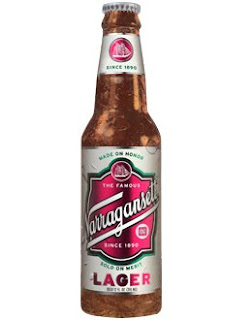 There is a local beer that I've found that's new sort of. It's called Narragansett and it's currently being brewed in Rochester, NY under contract with High Falls Brewing. It was at one time the largest brewery in New England. The brand got bought by Falstaff Brewers and they eventually collapsed, probably on account of their piss poor beer.

Since 2006, Narragansett has been available in New England once more and only in the past few months have I made this discovery. They are actually trying to build a new brewery in their original state of Rhode Island and they would like your help. I bought two six-packs this weekend and I got a free tie. I gave it to my friend Steve, because I'm a giver like that.

But my favorite past time while drinking 'Gansetts are to come up with a marketing pitch. It revolves around the concept of Gansett Time. This is pretty much when something horrific happens in your life, and you decide to escape to that mythical place that cheap local beer can take you.

I could go on, but I think this is better with audience participation. I should mention that I like Narragansett a lot and it's a far better beer than Busch or many of the American lagers. I would actually buy it if they didn't give out ties and inspire awesome slogans.
Posted by Hero to the Masses at 10:53 PM

Mark from Gansett here, it's GansettTime at Chatham Squire tomorrow at 3pm. Join me for a Gansett!