Best Week for Kids with Aspergers

I think the only person who might know what week this is would be my friend Nicole, who is a child psychologist who works with autistic kids.  It's National Transportation Week.  Even the President says so. So I have some transportation posts this week, and by week I mean Thursday through Sunday.  I've been playing LA Noire nonstop since I got it and it's essentially taken over my life.

So most people know about Zipcar.  It's a car sharing program that allows you to basically borrow a car for an hourly fee to run errands to see people.  Zipcar takes care of the insurance and the gas.  They'll even pay you if you wash the car.  And they're parked all over the place.  Well, last fall DC got this concept for bikes.  It's called Capital Bikeshare and it has changed my life.

Allow me to be honest.  I think the last time I rode my bike was in high school.  I'm pretty sure I haven't ridden a bicycle since then.  As a New Yorker, you pretty much walk or take mass transit.  And as a cop and then a Masshole, I ended up driving most places.  But when these bright red bikes started appearing all over DC, and they had a yearly rate of $50 for a limited time, I jumped on it.  I thought, even if I don't ride it, I'll support it.

They give you this cool little RFID fob that you place inside a bike dock, which looks like this: 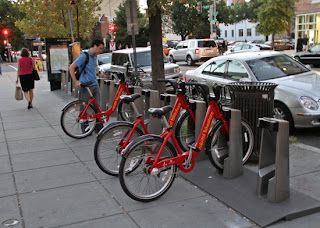 And then you hear a little bike bell ring, the light turns green and you remove the bike from the dock.  The first 30 minutes are free.  And then it's $1.50 for the next 30 minutes and like $3 for the next 30 minutes, steadily increasing as the time goes on.  They tell you flat out that this is not meant for bike tours.  This system is designed to run down to the grocery store, or to ride 6 minutes to your girlfriend's apartment.  In my 8 months of using the system, I've gone over 30 minutes once.  Some people are compulsive about it and end up docking and undocking their bikes mid-journey to restart the clock, but I don't really mind giving to a good cause.  Besides, my out of shape ass can't tolerate more than 60 minutes on a bicycle.

My first time riding to work, I remember pedaling down this hill towards Dupont Circle and I had this huge grin on my face and I think I actually screamed out "Wheee" which I'm sure got some looks.  But it just brought me right back to that joy of speed that you reveled in as a child.

The system has become wildly popular, which has it's ups and downs.  On the upside, more people are biking which is good for the roads because it increases awareness and drivers get more accustomed to seeing bikes and sharing space.  It also proves that this concept works , which wasn't a foregone conclusion given the last experiment in the district. And the downside is that it can be harder to find a bike when you want one, especially because all the traffic flows south in the mornings to the government buidings and then north in the evenings to the residential areas.  Also, there's a bunch of rubes pedaling around without helmets on their cellphones, so they could use some socialization as well.

I think that Capital Bikeshare is a definite perk of living in DC and it has changed the way I look at traveling short distances, because biking is always more fun and always faster.  It's coming to Boston this summer, and I hope my former neighbors have as much fun with it as I do.  Shout out to all the hard working people at Alta who actually operate the system and fix and move the bikes.  They are like the unseen gnomes of this entire process.  Though I'm sure some of them are quite tall.

Stay tuned for my next entry as I take my first long distance train ride in a sleeper car this weekend.

This is awesome-- I saw this in Paris and recently in London (a big push from Mayor Boris who lives to bike-- not that you'd know it because he's rather-- err-- portly). Happy to see it coming to a US city near you... Think it will gain in popularity and hit, say NYC or even the left coast?!

They're coming to Boston next. Alta is starting The Hubway. NYC is a little too big for something right now. Seattle I think would be perfect, except for all those hills.