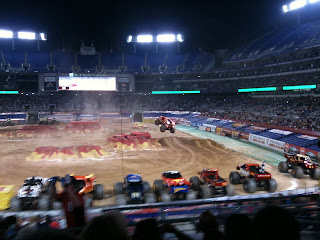 So this Saturday found me at M&T Bank Stadium in Baltimore for Monster Truck Jam.  I got these tickets through Goldstar which is like Groupon for events, shows and other stuff.  I am a large fan.  Anyway, when I saw they were available, I immediately snatched them up and sent an email to all my DC friends to the effect of "ZOMG! Monster Truck Fest!  Let's all go!" And you know what?  Not that many people in my friend circle are apparently into monster trucks.

I did wrangle another couple to come with my gf and I and we had a great time.  I learned a lot.  Here are some highlights.
So that was a little strange because you figure there's a much better chance of one of them winning, since there's three of them. 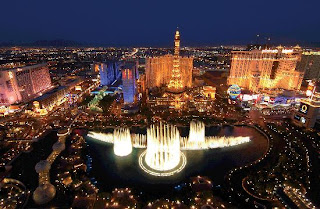 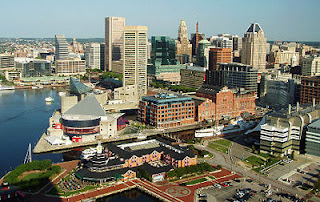 So you can see the similarity.  All in all, it was a good time.  Loud and different.  Though the announcer, who was like the Mean Gene Okerlund of monster trucks, was a buffoon who kept telling people how excited they should be that we were going to be on Speed TV

My final thought is that when the trucks crash in spectacular fashion, everyone loves it, but before the crowd can get concerned for the driver, this truck with lights flashing comes out.   I thought it was a fire crew truck, but then some dude started shooting T-shirts out of the bed of it.  You would have thought they were UN Food Shipments in Haiti.  Mind Boggling.
Posted by Hero to the Masses at 9:51 PM

i'm upset you didn't email me. i totally would have made the trip down - i haven't seen monster trucks since a summer long ago in NH.

son of a digger. AWESOME. that's totally my new expletive.