So one of my favorite website is Consumerist. Even more now that they were bought by Consumer Union, the owner of Consumer Reports. This ensures ad-free content, which helps keep out the bias.

My outgoing roommate had some issues with changing names on accounts and I thought it was crap. So I emailed the kids at Consumerist and they decided to share it with the Interwebs.

Enjoy my story.
Posted by Hero to the Masses at 10:46 AM No comments:

I have decided to eat bacon on everything until this whole swine flu thing blows over. I think I will gain immunity from the bacon, which will keep me in good stead.
Posted by Hero to the Masses at 11:40 PM 2 comments:

We hold these truths to be self evident

So I have taken hundreds of people's advice and Netflixed the John Adams series. I watched the first disc tonight and it kind of gave me chills. Call me a sap, but I think our history deserves another look. I learned the American Revolution in 6th grade I think, but this was a nice refresher. I also read 1776, which was a great book. If you get the chance, I highly recommend either or both.

I was sad to see the New York delegate to the Continental Congress so clearly in the loyalist camp. I took pride though in the stand my current state (MA) had. There were apparently Massholes even back then.
Posted by Hero to the Masses at 11:40 PM 1 comment:

5 of those calls was from me

Thanks to Sam for the find....

I somehow can't stop watching this.

Movies on TV (NSFW sort of)

I was watching Snakes on A Plane on TV a few nights ago and the best line in the movie comes up and I was wondering how they were going to handle it. This is how it went down. In case you've never seen it, the line which was originally written by someone on the Web who was excited about the title is: "I have had it with these motherfucking snakes on this motherfucking plane."


Then I was on Fark and someone reminded me of this gem, which really is the best. I'm not going to give you the original line, you'll have to see The Big Lebowski on your own. 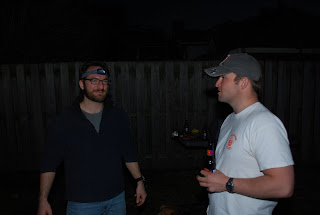 Tomorrow is the Boston Marathon, and it's Patriots' Day in MA, another awesome state holiday. I however will be at work coordinating the marathon. And yes, I do feel slightly bad eating my sandwich looking at all of those people running. Good Luck runners!
Posted by Hero to the Masses at 10:16 PM No comments:

So I was talking to a co-worker on the phone today while I was on the road and he mentioned we all just got an e-mail from the Governor. I asked, "How does it start?" He replied, "Dear Colleague."

Allow me to explain. Whenever we've gotten an e-mail from the Governor recently that has started with Dear Colleague, it's generally bad news. Health care premiums going up, financial armageddon, and this time was no different. The Governor is calling for furloughs for all state government managers prior to July 1st. If you make above $50K, but less than $75K, then you take 3 furlough days. Anybody above $75K gets 5 furlough days. I've never been so excited to make less than $75,000.

In English this means that the 5,000 managers will stay at home and see their pay reduced by a day. I have no idea how this will actually work out, but I'm assuming I'll find out shortly. I can tell you what I'm already thinking about though.

Stay tuned sports fans.
Posted by Hero to the Masses at 10:53 PM 3 comments:

I flew here on an American flight last night to stay with my college roommate who is out here. I upgraded to first class and was confirmed Thursday night.

So I've flown first class maybe 5 times in my life, which means it's still special to me. Add in the stop at the Admiral's Club beforehand to get some reading done and I feel like a seasoned air traveler. Odd considering that I don't fly for business really.

So the flight began with a drink and some warm nuts. This is apparently an American thing, where they warm mixed nuts and serve them. That was followed by the flight attendant asking what snack I wanted. That night they had a grilled chicken salad and a philly cheesesteak calzone. I could really feel her eyes boring down on me as she asked "Healthy option or greasy fattening one? I'm judging."

I went with the calzone. It was fine. Hot at least and awesomely greasy. It was not in any way shape or form related to an actual cheesesteak from Phliladelphia, but it was fine. Followed by two more mixed drinks, and a chocolate chip cookie. See, that's the problem. Everything in first is still a wonder, the free booze, the food and the dirty looks from coach passengers as they pass you on the way to their seats.

I'm not sure I will need it on the way back. But it was indeed a nice flight. Now I'm in Chicago about to grab a hot dog with my buddy.
Posted by Hero to the Masses at 12:34 PM No comments:

I was asked by my brother to update my blog more frequently and so I will. I also have some cool ideas for some new segments. Not that any of you really want new segments. I highly recommend that you fine readers use Google Reader with this blog, so you don't have to keep checking all the time. The reader will just post when I post. It's nifty like that.

I'm sitting in the President's Club in Newark Airport waiting for my the second half of my leg back to Boston. I spent the weekend, though truncated, in Pittsburgh visiting my brother and sister-in-law. She's about 2 weeks from having my niece or nephew and so we got this idea to do a baby bachelor party, where the father can get drunk for one of the last times in a little while. I love visiting them. They are so chill and all of their friends are chill. It's like recentering every time I go there. I do love them a lot.

And it came at a good time as last week was no good. There was some personal stuff, which was not good. Then I found out that I'm one class shy of graduating grad school. ARE YOU KIDDING ME? I was all done crawling to the finish and then you tell me the 5K is really a 6K? I think I have an interim solution as I am going to take a class on the business side in the beginning of the summer that should put me in the clear.

Oh, and my breakneck race to spend every minute of my free time continues next weekend when I'll be in Chicago. Stay tuned. I might be the only person to get DVT traveling only for pleasure.