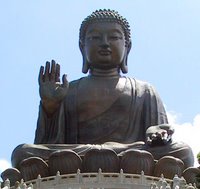 So today we took a ferry out to Lantau Island. There we got on this wild bus ride on these winding roads at incredibly steep grades. Our destination was the Po Lin Monastery. Here you may see the Tian Tan Buddha. This is the largest, seated, uncovered, buddha in the world. If you take any one of those descriptors away, you have like a buddha that's 10th on any list. So here is what the Buddha is supposed to look like. 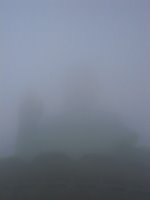 We all had a great time. Needless to say we couldn't see crap. All in all, a fun but cloudy day.
Posted by Hero to the Masses at 4:22 AM 1 comment:

Update: Here is the link for some of the photos. Check them out.
Posted by Hero to the Masses at 5:31 AM 3 comments:

I am sure you are all busy, but I thought you should see this little gem. It's from a local public station in Southeastern Ohio. They have a cute little news broadcast in the evening. And there's this guy named Louis who does the weather. Maybe he's doing this for community service? Anyway, he's pretty amazing. I am sharing this as my gift to you on Monday.

He sounds a little like Ray Romano, who's been drugged and told he has to do a weathercast or else his entire family will be killed.
Posted by Hero to the Masses at 1:47 PM 2 comments:

Happy St. Patricks Day! As I sit here in my green sweater about to go down to my local watering hole, I wanted to wish everyone a happy holiday. On this day, everyone is Irish. Even orthodox Jews. So raise a glass lads and lasses and drink one for the old country, regardless of what country you actually came from

On a wonderful side note, this is a state Holiday in Massachusetts. It seemed the Irish Catholic politicians at the State House didn't want to be at work, and wanted to be drinking with their constituents. So they looked into it and it turns out that something else happened on March 17th. Evacuation Day. We can't have a secular holiday like St. Patty's Day off, so instead I will be pouring a little out for the Continental Army very shortly.

So this morning, the alarm went off at 6:30 and I woke up and heard my roommate in the shower. Now Jeff likes to use the entire Quabbin Reservoir system to wash, and therefore if I follow right after him the water can be a little cold. So I hit the snooze button, and went back to sleep.

I woke up over an hour later...thank God. I realized I've broken the snooze button. Sure, I've had this alarm clock since high school, but I still bask in my achievement. I am a lazy man. So I'm on the market for a new alarm clock. I enjoyed looking at this page....any suggestions?

Coolest Alarm Clocks Ever
Posted by Hero to the Masses at 9:46 AM 1 comment: 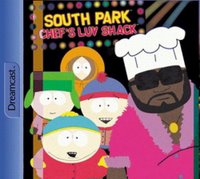 So it started raining all of a sudden here, and I can hear the thunder. I love thunder. Mostly, when I'm inside a home that has power and I have a fire going. But I'll take power and a high speed internet connection also.

Issac Hays is quitting South Park. He was the voice of Chef, and I liked him on that show. I love that show. I guess my gallows humor is a product of my former career. And that show pokes fun at everyone. Did you know that Issac was a Scientologist? Me neither.

Sorry this is a boring post. Lemme give you a great website to make up for my ramblings. I give you the soon to be taken over by CNET (a good thing), Chowhound. If you like food, as I do, check this site out. Great knowledgeable people.
Posted by Hero to the Masses at 11:18 PM No comments:

Yesterday, I went to a place called Dave and Buster's in Providence with two friends. Basically it's an arcade with beers. I strongly recommend that if there's one around you, and you want to revisit childhood (with alcohol) that you go.

Good times. We even won enough tickets to buy more than an eraser and a pencil. I had to stop Chuck from wasting our tickets on the hand blender.
Posted by Hero to the Masses at 3:14 PM No comments: 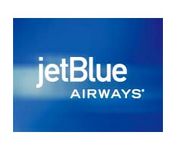 So asides from being a police officer, I always wanted to work at an airport. Yeah, I know it's dirty and subject to climate change, but it always tugged at the heartstrings. So I was surfing the Web, and found a Jet Blue job in provisioning at Logan. This is basically the guy who restocks the plane with drinks and food. But...you get to drive the carts and stuff, which is what I've always wanted to do. And...it was part time.

I thought I had found the perfect second job. So I applied and I got called. I was so excited...only to find out that they need you available at all times because there is no set schedule. I'm not sure the great Commonwealth of Massachusetts would like me calling in to go push airplanes back from the gate.

I'm crushed. I was so excited to lug bags around. I am a freak I know.
Posted by Hero to the Masses at 9:55 AM 2 comments: 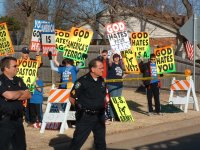 Whatever you're take on the war....no one can deny the sacrifice these kids are making. So hats off to these bikers. And can someone please run these people over....before their inbreeding goes too far?
Posted by Hero to the Masses at 8:54 AM No comments:

So I have returned from New York, NY this evening. And there are a few things that I really miss about that place...

First, I miss the bagels. Sure, there are bagels here in Boston, but they suck. They need to be crunchy on the outside and soft in the middle. Also, any deli in NYC will sell you a bagel that is better than 99% of the places up here. Bruegger's is crap. You can tell Mr. Bruegger I said so. Note: I have it on good authority that Arlington, MA has some good bagels. A reliable "healthy" source

Second, I like the fact that the way I take my coffee (milk and 2 sugars) is termed "regular" in New York. Up here, regular is 2 sugars and cream. So I have to yell "Milk and Sugar" when I go through the drive through. And often times the call taker in India can't hear right, so I get milk and no sugar. Boo...

I was at a dance club in Brooklyn until 5AM last night. I'm an old man. I literally was falling asleep . Some girl could have been shaking her scantily clad Dominican ass at me, and all I would have given her was a snort and probably a little drool. I'm more of a "bar" man. I'm going to sleep now. For many moons.
Posted by Hero to the Masses at 9:56 PM 1 comment:

I realize I haven't written in a while. My fans must be starving. (cue crickets)

Sitting here listening to some Kanye West, which is very good by the way. Today is Ash Wednesday and the beginning of Lent. I'm not particularly religious, baptised Protestant, though I lean towards Unitarian Universalism. My friend Steve has a joke....

Q: How do you scare a Unitarian?
A: Burn a question mark on his yard.

But people had Ash on their head, and like every other year I thought that a lot of people has a skin problem. Like psoriasis. I'm a dolt. Obviously yesterday was Fat Tuesday, Mardi Gras. And everyone down in the French Quarter got their drink on up until midnight when the streets are literally cleaned and the bars close for the first time in 2 weeks.

I love the fact that in preparation for Lent and their sacrifice to the Lord, they consume as much sinful stuff as they can. I'd go to church if this were the policy. Strippers and kegs during Mass. Techno music during the sermon. I mean that is living like each day is your last. And that is why I'm going straight to hell. I'll just ask Dick Cheney to leave the light on for me.
Posted by Hero to the Masses at 6:05 PM 1 comment: