So, in the two days since my last post, some really cool stuff has happened. What began initially as a rebellion against the Westboro Baptist Church turned into a Vassar LoveFest. I've gotten some comments that said we shouldn't do anything in response. That they feed off the response. Lets get one thing clear. These people don't give a shit about counter-protests. They could care less if you show up or not. They enjoy their constitutional freedoms and further enjoy the lawsuits that they get to file when they feel they've been violated. Because the only thing worse than a family of religious bigots is a family of religious bigoted lawyers.

Anyway, enough about those losers. Remember the fundraiser for the Trevor Project? Their goal was $4,500. Yeah, they're currently at over $67,000 with over 2,000 donations.   So that's better than a collage of puppy photos. Second, watching all of this pride on Facebook and Twitter, I thought about how to celebrate that. So, I suggested the idea of having Vassar Club events on the evening of the 28th to just get alums together to drink and laugh and share what made Vassar so special. Personally I think getting alums from over the years together is a great reminder of how special VC is by itself.

Cathy Lunn, who oversees the clubs for AAVC, sent out an email to the larger clubs suggesting that idea and it turns out that some, like NYC, were already planning something. Damn you New York. Always ahead of the curve.  So I thought I would list the clubs participating in Pride Night and people can hopefully find a club near them.

As more parties come in, I'll update the list. But simply put, this is awesome.  This isn't an AAVC thing and it doesn't have to be a Club thing. If you live somewhere like Albany, I'm looking at upon Mazura, and want to have a get together, I'm happy to post it here also. Either leave a comment or email me. My email is the contact info for the DC group.

Thanks to the Westboro Baptist Church

So today, the Westboro Baptist Church announced that they will picket Vassar College on February 28th, for apparently 45 minutes.  Their press release is below.  They had a Twitter post that called the school "fag enablers" 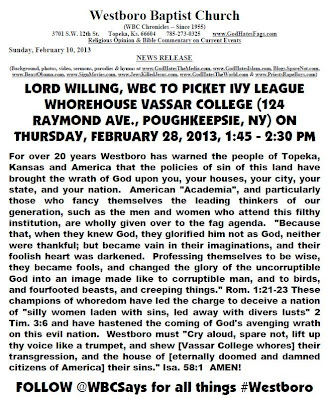 Now, this protest is only for 45 minutes and as usual, there will be far more counter-protestors than protestors.  WBC doesn't actually care about the protest.  They are actually hoping that their rights to assemble are infringed upon and then they sue and fund their bizarre little empire.  The Southern Poverty Law Center has rightly labeled them a hate group.

I went to Vassar College and graduated in 1999.  Friends and fellow alums have posted some great stuff on Facebook.  My friend Tom posted this:
"Westboro is going to Vassar? Hoo-boy. You're bringing a fart to a shitfight. Sure, 'don't dignify them with an answer' is the way most would deal with this. Vassar students, on the other hand, have been training in mountaintop dojos for 150 years for this. When someone inevitably prints up, "Fag Enabler" t-shirts, send me one."

Someone else set up a Crowdrise fundraising page for The Trevor Project, which is a group that provides crisis intervention and suicide prevention to at-risk LGBT students.  The page was set up today with a goal of $4,500.  It's currently at $7,223 13,878 and climbing.

Yet the thing that I kept thinking about, was not my anger at the ignorance of a family of lawyers, but my love of my college. Vassar is a weird and quirky place, that used to have an event called The Homo Hop.  I was told when I got there that we didn't have a homecoming, but a "homo-coming." And while each year, seniors are convinced that the freshmen are boat shoe wearing, popped collar having, rich conservatives, its not really true.

I was a tour guide and every few tours, when I finished the tour and was standing around waiting for individual questions, a parent would come up and ask me if it was true that the school was 40% gay.  (I have no idea where they got these numbers.) I would say honestly that I didn't think Vassar had many more gay students than any other college.  I thought that gay students felt more comfortable at Vassar, enough to hold hands in public, or to kiss each other at parties.  I said that I was glad that I went to school in a place that felt that safe enough for people to be who they really are.

I am immensely proud of where I went to school.  And I had forgotten that pride, as life often gets in the way of remembering the things and places that made us.  It's easy with careers and family life to forget how we became who we are.  The people that I studied drank alongside of are probably some of the most amazing and intelligent people I've known.  To broadly paraphrase Groucho Marx, I'm not sure I'd want to be associated with a school that the WBC wouldn't protest.

While those inbred morons did not mean for this byproduct, I am so glad they decided to protest.  It has brought back a flood of good memories and long smiles.  And it's helped me remember a place and a people who've made my dumb ass who I am.