Throw Off Those Lanyards

Last night, I had the opportunity to see Measure for Measure at the Shakespeare Theater in DC.  It was brilliantly directed by Jonathan Munby and the acting and lighting and sound were terrific.  A really enjoyable take on one of Shakespeare's not often produced plays.  The cabaret that began the show for about 20 minutes even had boobs for the kids.

But I was there to witness the performance of my friend, Miriam Silverman who was excellent as Isabella, as she is in really everything she does.  She married my good friend from high school who is also an actor, and they come down to do shows at the Shakespeare Theater in DC with some regularity and my girlfriend and I are the lucky recipients of free tickets to see great shows.

And it struck me that it's rare to see your friends at work.  Sure you may see them on conference calls or mashing a reply to their boss on a Friday at happy hour on their phone, but actually watching them do their craft is rare.  I don't like the word craft, but I use it here to make a point.  I work in L'Enfant Plaza, and like Crystal City, where I've also worked, it is populated by office drones.  You can spot them by their lanyards and FIPS 201 standard badges.  And when asked "What's going on?" you will oft hear said "Same shit, different day." Many of these people have jobs, but they don't seem to have crafts.  Granted middle management federal bureaucrat is not very craft-ish, even if they vastly outnumber actors, starving or otherwise.

Perhaps arguing with IT about printer drivers really is someone's perfect day, but its not mine.  I'm not sure what I'm supposed to do with my life and at 36 and three-quarters am still wondering what I'll be when I grow up.  But I hope it doesn't involve a lanyard with an ID, because the idea that we can be truly happy outside of work while hating our job is a fallacy.  We spend so much time at work, whether physically there or mentally due to smartphones.  I don't mind work being a heavy part of a work-life balance.  I just want the work part to count for something besides a 401 contribution and 10 paid holidays a year.

Posted by Hero to the Masses at 2:52 PM No comments: 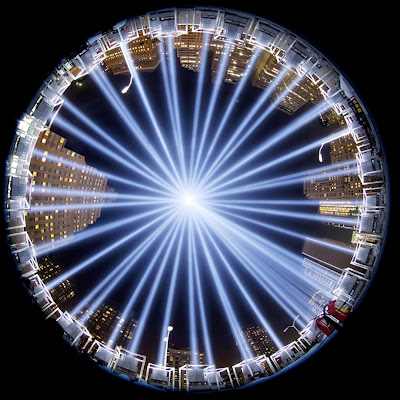 The above photo was taken by Mark Lennihan, an AP photographer from the base of the Tribute in Lights memorial piece at the base of Manhattan.  I always loved the lights and wished they had stayed up longer, stupid migrating birds.  I think part of the reason I liked them so much was they were silent and incredibly powerful.  People reported seeing them from the Jersey Shore and out on Long Island.  They were an incredibly powerful tribute to the buildings and New York that was before 9/11/2001.

I miss that quiet reverence.  Today on the National Mall, we had some Muslim 9/11 Truthers who had planned something called the Million Muslim March.  Well, that freaked out conservatives who responded with the 2 Million Bikers to DC.  [Sidenote, remember when the first Million Man March happened and we actually thought we would get a million people anywhere] So you've got these morons yelling about false flags, and other morons yelling no to Sharia law.  Then there were still other morons called Patriots 4 America who were yelling to get Obama impeached.  Finally, the biggest boob of all, was railing about Benghazi.

I have one favor to ask everyone.

Today is not the day for your platform, or your cause.  This is not your day.  It is everyone's day.  Maybe this day will turn into some bullshit holiday like Memorial Day, where people actually say Happy 9/11 Day, and Sears offers amazing deals on lawnmowers.  Maybe people one day will forget what happened on this day so many years ago, and just recall it from a CNN broadcast of B-roll of buildings collapsing and firefighters hugging as "reporters" blather about nothing.  Maybe that will all happen.

But not today.  Today, I remember.

I remember how blue the sky was that Tuesday.  I remember that the weather was perfect.  A little cool, but one of those crisp fall days in the city that rival any New England foliage.  I remember how nice everyone was that week.  How people actually were aware of the police and thanked them, as opposed to viewing them like lamposts or the homeless, something you see but don't notice.  I remember a city being briefly panicked and then just being so kind and so strong and people just helping everyone and caring about everyone. It showed the inside of a New York that you knew was there as a New Yorker, but never usually saw.  Mostly I remember it being quiet.  The light would turn green and nobody honked.  And that was unheard of in a city that used the horn like teenagers use emoticons.

I am lucky to have a Facebook feed filled with friends and police officers which means that today was an outpouring of memories, grief and pride. I don't think everyone needs to wear black today.  I don't think people can't get tanked and make life mistakes today.  But you respect this day and you don't use the memories of dead heroes and flag pins to score political points.  To gin up outrage for your cause.  There is no outrage so great that politicians can't wait 24 hours to rail about it tomorrow.

Today is a day for quiet.  Not literal quiet, but the silence from sensationalism and hyperbole and outrage.  Seriously.  Shut the fuck up.

P.S. I wasn't going to post today, because I didn't have much to say that I hadn't written about in years prior, but my friend Brian Grosz, tumbled (or whatever you kids say) something that struck me.  So thanks Brian.
Posted by Hero to the Masses at 6:00 PM 1 comment: