When we last talked, I was about to fly all around the globe in a week.  I did that.  It was done.  I actually was a guest blogger about the experience for a travel site.  You can read that here.  Basically it was a ton of fun, though expensive fun.  The best parts of the trip were easily, the people, the 787 and meeting the folks from LiveStrong.

So the people.  This wasn't my first time meeting real humans that I met on a web site.  I had been to the Chicago Seminars and also had been to a bunch of Yelp functions.  And my theory of "Online Thirds" was correct here as well.  When you meet people you only know as avatars and posts in real life, a third of them will be exactly as you imagined them.  Gregarious, funny, loud, what have you.  A third of them are super quiet online, but in person are really amazing and outgoing people.  And the final third are people that should only exist and interact in a virtual environment.  They're either creepy, close talkers, or incredibly socially awkward.  Like the guy who kept "shushing" people at a party in someone's room.  Dude, this isn't 5th grade.  And there's no point in preserving a party where you can't talk.  Or you're getting shushed at. 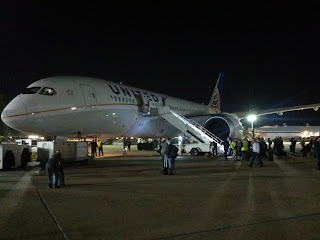 The 787 is an amazing plane.  Really.  More evolutionary than revolutionary, it just seemed more comfortable.  A lot has been made of the window shades, which are electronic and darken through electrical current.  I think the coolest thing was actually the size of the windows.  33% larger than regular windows.  Also, the seats even back in steerage seemed much more comfortable.  I look forward to flying to NRT on the inaugural flight from Denver in March.  Also, flying in a plane that only a few days old is pretty cool.

Finally, I met three wonderful folks from LiveStrong, the charity most known for the yellow bracelets that everyone and their brother wore a years ago.  They have taken a hit with the whole Lance Armstrong thing exploding. And admittedly I didn't really know what they did, besides fighting cancer.  Well, Jen, Renee and Colleen joined the trip in San Fran and stayed until Chicago.  I learned that Livestrong does really cool stuff like assign mentors to cancer victims to help them through their recovery.  And with Armstrong stepping down from the group that defined him as much as his yellow jerseys (Now confiscated), it helps to have some incredibly bright and caring people to share the organization and its mission.  I will totally support this charity, having cancer affect my family.  It's nice to be able to give back, even while drinking at 30,000 feet.

I will leave you with this video of my attempt at a safety demo at the United Flight Attendant Training Center outside Chicago. I'd like to thank the very lovely and patient Lauren Cyr, my flight attendant instructor who can be seen helping me with my life vest.  Stay tuned through the whole thing for the surprise ending.  Well, it was a surprise to me.

Wait, You're Doing What Next Week?

As I have mentioned in previous posts, I have a thing for traveling.  Well, not just traveling per se, but collecting miles or points and then using them to travel to cool places.  I'm one of the few people who likes air travel.

However, today I'm embarking on a trip that's weird even for me.  Weirder still, I'm going with about 200 other people who share the same hobby.  Here is my flight path for the next seven days.

I'm participating on this thing called the Star MegaDo 4.  Star because it's for the Star Alliance.  MegaDo, because it's a large Do (duh). And 4, well I'll let you figure that one out.  The International Portion which is only about 50 of us heads to Frankfurt to meet with Lufthansa for a few hours and then to Zurich to meet with Swiss Airlines for a day.  And then we're joining United on the three domestic cities.

Airlines love this because they get access to the most rabid travelers they have.  Literally a super-user group that knows more about the ins and out of their airline than many executives.  And flyers like it because they get to meet other people like them from all over the world and they get to do cool stuff like be on the tarmac at airports which still makes the kid in them smile.

So I'll be blogging while on the trip.  Also, the trip itself has an actual blog, written by Randy Petersen who is well known for founding the two major frequent flyer blogs.  You can follow that here, if you're so inclined.

Some might wonder why I'm doing this when I have no real income stream.  Well the tickets were paid for, so asides from food and the hotels I'm splitting and the money for charity, it was worth it to me.  I don't buy clothes, ask Allyson.  My main purchases are travel and video games.  Which while nerdy, is better than hookers and blow.
Posted by Hero to the Masses at 2:59 PM No comments:

No Way in Hell the NYC Marathon Should Go On. (Updated: It's not)

Updated: As I wrote this post, it was announced that the marathon was cancelled.  Clearly they knew that I was about to publish this post. Also, I changed the title of the post as it was unfair for the runners and the organizers should have borne the vitriol.

Perhaps I'm cranky today.  Maybe it's Donald Trump being Donald Trump.  Or maybe its the fact that NYC got hit by a hurricane and everyone knew it was going to be serious and the news is filled with stories of horror that could have been avoided. Or maybe I just am tired of the election and the schizophrenic polling which is exhausting to follow.

However, the news that the NYC Marathon, one of the world's largest and preemient racing events, will be go on as scheduled really bothers me.

He's quoted by Sports Illustrated as saying "has to show that we are here and we are going to recover'' and "give people something to cheer about in what's been a very dismal week for a lot of people.''

Let's talk about this for a second.  The Marathon is only exciting for one group of people, those running the marathon.  Very few New Yorkers look forward to a weekend day in November when driving and walking anywhere is impossible.  I remember sitting in traffic headed to work in 2000 for an hour and I moved a block.  A total nightmare.

Also, is there any doubt that NYC is going to recover?  New Yorkers have no doubt.  Sure there are some living near water that may relocate or move. But NYC is resilient, and you don't need to convince New Yorkers of that fact.  We went through 9/11.  We know what the city is made of.  So maybe you're trying to reassure tourists.  Well, two things on that.  First, a marathon isn't the event that's going to do it.  Second, tourists don't leave Manhattan below 59th St, and once the power comes back online, the city will be full of shoppers and morons staring at the big tree.  Don't worry about them.

Bloomberg also said, "You have to keep going and doing things,'' he said, "and you can grieve, you can cry and you can laugh all at the same time. That's what human beings are good at.''

Alright,we're not talking about cancelling the marathon because of the enormity and sadness of the storm.  We're talking about a simple logistical matter.  Rest assured that if 2 bombs went off at schools, killing over 40 children (approximate number of Sandy deaths in NYC so far), then the marathon would be cancelled in a national day of mourning.  But that's not what happened.  This is not about restoring New Yorkers faith in humanity or the city or America.  This storm should inspire a closer look at SLOSH maps by New Yorkers, but that's it.  We don't need time to grieve.  We need time to get to the Home Depot and buy some tarps and drywall, without miles of traffic caused by an unnecessary athletic event. 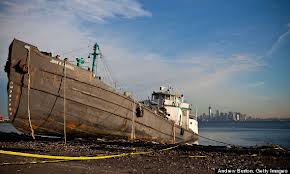 Oh, and marathon runners, I'm not against you.  I've run 5Ks which I know is what you do in order to break a sweat.  I understand the mental importance of finishing NYC.  But do it another year.  New York asks you.  You love this marathon because you get to run through the greatest city in the world on a nationally televised race.  The people of that city are trying to put their lives back together and you're being here does not help.  Trust me.

Posted by Hero to the Masses at 5:32 PM No comments: