These guys must have gone to Suffolk

Tonight finds me on the Left Coast in lovely Commerce, California.  You've never heard of it.  It's easier to just call it LA, since it's in the sprawling metropolis, a few cities away from downtown.  My hotel overlooks these outlet malls, called the Citadel, and they're shaped like a fortress.  Odd place.  It looks like this. 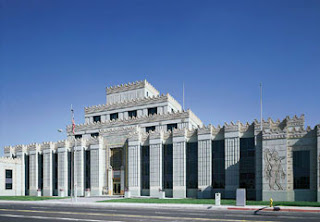 We were driving to In N Out, for dinner.  (Double Double, Animal Style, in case you were wondering) We happened to pass through the City of Vernon, CA.  Their motto is "Exclusively Industrial".  I thought that was an odd phrase, certainly discouraging residents.  But the more I thought about it, perhaps high on burger juices, I realized that this city was brilliant.  You have all the tax base with none of the services.  No schools, or parks departments, or any services that whining residents care about.  You'd have tons of money to do whatever you wanted.


And, after some internet research after dinner, it turns out that they pretty much did whatever they wanted.  And their city manager was collecting a salary of $800,000.  Oh, and they have a population of 90, people.  See, people tell me government is not where the money is.  Idiots.
Posted by Hero to the Masses at 1:42 AM 2 comments:

Global Climate Change and the FWD

In honor of my brother, the paleoclimatologist, a word which blogger seems to think is spelled wrong but I know is not, I wanted to weigh in on my local experience with "Global Warming." Technically, he's a paleolimnologist, but you that's clearly above my head.  Suffice it to say, he's a geologist who studies lake beds and soil to determine changes to the earth over time.

It used to be called Global Warming, but then we get a few super cold days and the non-scientists get all huffy about "Where's your warming now?"  So I think it basically boils down to rapid climate change in either direction.  Which is bad.  For instance, on Saturday is was 70 degrees.  And tomorrow it's going to be in the 30's with sleet and freezing rain.  This is not fair.  Though Saturday did provide the FWD for the region.

The FWD is the First Warm Day.  It is a glorious occasion where girls who have been constrained by duck boots and puffy coats for many months rejoice in getting to wear their summer clothes.  What makes this more special is that the clothes are generally a little too risque for the weather, given the anticipatory shopping that has gone on for cute tops and short skirts over the past 6 months. 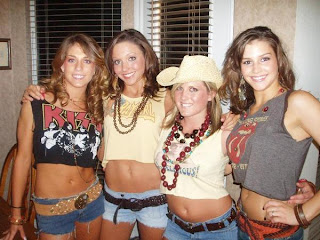 Posted by Hero to the Masses at 9:33 PM No comments:

So I have a problem with dress shirts, but at this point, I'm not sure it's the shirts fault.  See, this is what has happened to about 10 shirts in the last two years.... 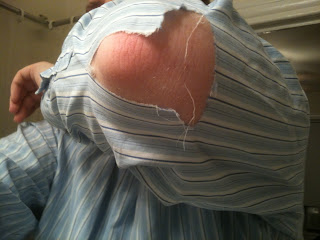 This was a particularly nasty one.  Usually it's more insidious and forms a small hole that I notice but forget about and then end up wearing it to some important business meeting.  It happened to a bunch of my Brooks Brother's shirts recently.  Non-iron.  God I love those shirts.  So I thought the problem rested on them.  But now I am thinking that it has to do with how I sit at my desk.  I'm a lefty, so I use the mouse with my right hand.  This leaves my elbow free to sit on the desk with my hand under my chin, pondering the universe.

I am become Death, Destroyer of fine dress shirts (but only the left elbow)
Posted by Hero to the Masses at 7:19 PM 4 comments:

Today is not only St. Valentine's Day, but also Singles Awareness Day, for those who do not have a Valentine.
The History Channel has a great site which tells you all the things that happened today in history.  And I was pleased to learn that penicillin was discovered today.  In other news, I am currently making penicillin in my fridge right now, thanks to some Sandwich Thins that have past their prime.  They have not died in vain.  I'm going to use them to stave off an infection.

Hope everyone has a terrific day today, whether with someone or not.
Posted by Hero to the Masses at 2:26 PM 1 comment:

Welcome back. I left this blog over a year ago because I was working in the private sector and didn't want to get caught saying something dumb, as I had seen happen to other people. So I posted a few times on that blog, but it never somehow felt right and eventually I stopped.

So in the interim, I've realized something. I missed blogging. It takes a fair amount of time, and can be quite time consuming. But I discovered that I needed a forum to vent or discuss things that were longer than a Facebook status update or Tweet. I don't expect people to follow me. I think in many ways, I'm returning to this blog for myself.

And as for the lack of anonymity, I think it's safe to say that I'm not going to running for office or blowing any whistles on this thing. This is more to capture eating contest championships, exciting trips and my geekery around transportation.

So I'm back. And in the spirit of leaving something good, I have combined my love of musical theater and "How I Met Your Mother" and I give you this clip.