The title of this post would make this seem like an exciting trip.  Perhaps some gambling, David Copperfield and alcohol fueled binge.  It was not.  I was there for work, teaching a class.  I've been furloughed as part of  the House GOP's War Against The American People, so its nice when there are other things I have to make a little money.  I also love teaching, so its a win win.  So landing in Vegas at 9PM and flying out the next day at 10PM, here's some highlights and lowlights of the trip. 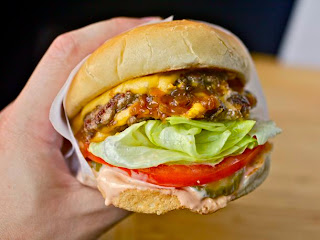 A bit cliched I suppose, but my personal rule to get a Double-Double Animal Style on every trip that takes me to a place with In-N-Out has never proven me wrong.  Watching the young kid destroying potatoes in that contraption that makes them into raw fries is fascinating.  And yes they do love Jesus, but not with the political sideshow of Chick Fil A.  I think the East Coast beats the West Coast, but I have to say that the fast food on the West Coast destroys the East Coast.  You ever stopped at a Roy Rogers on the Jersey Turnpike?  Ever see anything that resembled the photo above?  Yeah. 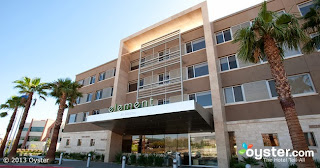 This is one of the newer Starwood lines.  It's a brand by Westin that focuses on sustainability.  Honestly, I can't say too much about it because I got in late and left super early, but it was clean and nice.  I like that they lend out mountain bikes and provide free breakfast, which is rare for Starwood properties.  I would stay here again.  In fact I'm staying at the same hotel in a month, but sadly only for a limited time again.  Hopefully get to try the gym this time.

The Other Side of Vegas 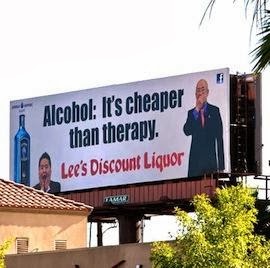 So most people who go to Vegas go to the Strip, which is where you can see thousands of people shuffling along wearing ill-fitting shirts that usually read something like "1 Tequila, 2 Tequila, 3 Tequila, Floor" or something equally as witty.  However being there for work meant I got to see the other side of Vegas, which looks less like the glitz of the Bellagio's fountains and more like a sprawl of title loan places, pawn shops, psychics, fast food and liquor stores.  I guess this isn't a surprise.  Look at Atlantic City.  It has one supermarket, which just opened in 2012.   It is weird though, because driving through Vegas can feel like a Hollywood set with the Strip being the side the camera faces and the plywood backing being for the residents. 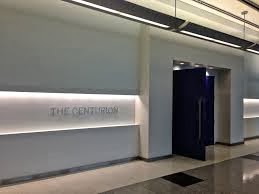 This was a highlight.  I saw it when I landed and read about it.  American Express built a travel lounge concept that is high class with hot food designed by Scott Conant and special cocktails also.  It's unlimited, all you can eat or drink.  They also offer showers, free tablets and headphones and chaises so you can nap or lie down and watch the airport.  The catch?  It's only free for Centurion (Black Card) members, with all other Amex cardholders needing to pay $50.  I had won $40 on a few spins of the Wheel of Fortune machine at the Palms, because I'm a whale and so I thought I'd treat myself.  Imagine my tears of joy when the woman said that they are now allowing Platinum cardmembers in for free also.  Let the Bulleit flow like water, friends!

Las Vegas, you are unapologetically American.  I hope that the National Parks are not closed so I can see Red Rocks next month.
Posted by Hero to the Masses at 7:20 AM No comments: