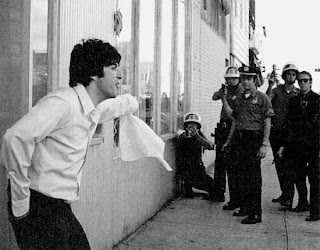 So today 5 banks were robbed in NYC, prompting news articles and even a piece on NPR's All Things Considered. The media is pointing fingers to the economy and the lost jobs around the holidays. 5 banks is surely the sign of financial meltdown, or the sinister return of high crime numbers to plague Gotham.

There is a reason why people should not fear a return to lawlessness with an uptick in bank robberies nationwide (Up 54% in New York City this year.) Because my friends robbing a bank in the City of New York is easier than robbing a pizza place on the corner. I don't want to give away trade secrets, but here are the items needed to rob a bank in the early 1900's:
Items needed in 2008?
These are all "note jobs", which means perp walks into bank and scrawls "Give me UR $$, I hav a bumb" on a deposit envelope and a smiling woman behind counter hands him money. Sometimes it's not a lot (couple hundred) and sometimes it is (couple thousand). But how can the perp be angry. He just used a pen to defeat bulletproof glass. Because friends, the banks happily give up the cash as it's insured by the Feds. So to them, they would rather lose $1,000 than have their guard tackle the guy, sprain his ankle and have the perp sue for $1 million dollars.

But try doing this at your local pizza joint. Walk up to the counter and smile at Sal and give him a note that says "Give me al UR pizzas!" and see what happens. Either:

a) You get your ass beat
b) You get laughed at and then realizing you are serious, see above step

So this isn't another sign of financial armageddon. This is business. And the only people hurt by this is the Precinct C.O. who is being held accountable for an extra robbery in his/her precinct than no one else seems to care about.
Posted by Hero to the Masses at 9:36 PM No comments:

Email ThisBlogThis!Share to TwitterShare to FacebookShare to Pinterest
Labels: NYPD

To borrow from the Counting Crows, it has indeed been a long December. I had planned more blogging, but this happened. That storm brought 13 hour days on the night shift for about a week. Followed by damage assessments in communities that I had talked to on the phone but never been to.

Then I flew down to NYC to be with the family for the holidays. I also wanted a week off. This is my first week off this year, so it's nice. And so, I present some holiday thoughts from New York City.
Merry Christmas to all of you. And sorry for the intermittent posting for this month.
Posted by Hero to the Masses at 3:15 PM 1 comment:

So on the way to work every morning I listen to Morning Edition on NPR. It's got really good coverage. My friend Chuck thinks it's communist radio, and while I will agree that it might be a little left, you can't get more interesting stories in the morning. Also, they have the BBC News on at 9, which is great. They apparently believe in covering news, while our networks have scavenenged our news divisions in the name of entertainment.

However, every 5 months or so, comes an evil time on NPR. Pledge Week. It seems on WBUR that it's been going on for 2 weeks. NPR pledge week is the 6th circle of hell for two reasons. First it interupts the programming. Just when you get into a story, they break and start asking for $$ again. It's disruptive. Secondly, and most importantly, they are awful at it. They seem to guilt you into giving. They talk about how much it costs, but never about how much they want to raise. (I know this is against fundraising mantra.) Also, they banter in small talk, off script, and many of them aren't good at it. They end up saying the same things over and over, which means you have to change the station.

Here's the thing. I gave $100 last drive. I'm all set. So why force me to endure this brain melting tripe. What if they could unlock my radio if I gave, and return me to the programming? Think about it. If you give $50, you buy out of the current pledge week and back to normal NPR. You give $100, you buy out of it for a year. They would make so much money, they could sleep on it. Or use it to wallpaper the studios. I think I'm onto something. Maybe with HD Radio, they could do it. If they can put peanut butter and jelly in the same jar, why the hell we do this?
Posted by Hero to the Masses at 10:16 PM 2 comments:

Looking for that special someone?

It's the holidays, as if the music and the smell of fear from the retailers didn't give it away. And I know many people are thinking of tightening the old purse strings and giving less gifts. I can understand that. However, some of you might be unable to do that because of psycho girlfriends or blood oaths sworn to extended family members by your ancestors on the top of a mountain in the 1300's.

For those of you looking to pick up a little gift, the Mass Turnpike has an idea:

This is a gift certificate to the Mass Pike. I, for the life of me, can't understand who would buy one of these. I saw them advertised on the variable message boards on the way home and thought, "What a terrible gift." I don't mean that people wouldn't like some toll relief, especially as this news breaks. But imagine the look on your loved one's face, when they tear open that envelope to find a MassPike gift certificate. Nothing says "I totally forgot about Christmas because I've been drinking for the past week, and so I pulled into the Natick travel plaza and bought this thing from the FastLane Office."

Remember, shopping is what civilians can do to save the economy and fight the terrorists.
Posted by Hero to the Masses at 7:14 PM 1 comment: