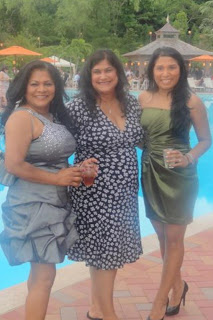 Dear Readers,
The beautiful woman in the middle of the photo to the right is Natalie Ramratan. I stole this from her Facebook page, but I don't think she'd mind.  Natalie worked with me in the 28 Precinct when I worked for the NYPD, what seems like lifetimes ago.  When I first met her, I was totally scared of her.  We were brand new and bumping into everyone and saluting statues and running to calls on foot, and no one really liked us.  I came to find out later, that out of the two field training squads, I was placed in the Special Ed one.  But that's another story.

Natalie could cut you down with a verbal tongue lashing or a look like no one's business.  I learned that when I made the mistake of wearing a Mount Gay rum t-shirt when we went out drinking one of the first nights.  This was a mistake.  You should understand that the subtle and intellectual humor of the NYPD does not shy from the hilarity of calling me gay.

Later I realized why Nat was so hard on us, acting like we were idiots.  It's because we were idiots.  If I ever write this book that I haven't started and is only in my head, I will point out that while the Academy does teach you many things, it can't prepare you for working on the street or inside the precinct house.  And in reality, there was so much we didn't know and they would grudgingly teach us.
After I proved myself, I got to be treated to the real Natalie.  Quick with a smile and a laugh, always ready to lend a hand when you really needed it and still quite able to dispense the word "dumbass" when it was appropriate. 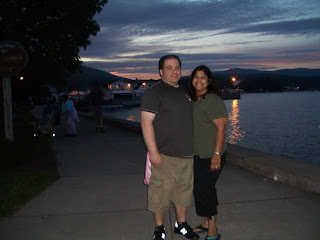 Then she met George. George was a quiet guy who was, and is one of the nicest, gentlest men I know.  He had this super dry humor, which combined with him not talking that much, made him hysterical.  Guys used to go to Tom's Diner for food at times.  This, for those who watch  TV, is the diner they used in Seinfeld for the exterior shots.  Anyway, it was run by Greeks, and when George was there waiting for his order, he heard the waitress say something about "these fucking cops" to the cooks.  George leaned over and said in Greek, "You should be careful what you say, because you never know who can hear it." She turned white, and the owner was apoplectic.  George never taught me more than a few curse words, which honestly is all a cop really needs.

Natalie caught pneumonia and a kidney infection in early March and was transferred from a hospital near their home to Mt. Sinai in Manhattan.  I was just going to offer up my parent's place for him to shower or change.  (I didn't ask, but I'm sure my parents would have understood) Last night, Natalie passed away in the ICU, surrounded by her family, and then mourned by her larger family of officers.  While I am not a huge Facebook fan, it's been really special to see all of these people that I worked with, sharing their grief together.

I haven't spoken to Natalie in over two years, since the last 28 Reunion night.  I think what makes this such a hard loss is that working with her on the 3rd Platoon (So called because it's the 3rd shift of the day, with the first being the midnights) was some of of my fondest memories on the job.  Working with my partner and some great officers and a terrific boss, it made it fun to come to work.  I miss that time.  I miss Natalie.  I am flying to LA for work this week, but I'm waiting to hear about the funeral.  I will try my hardest to go.  And if I can go, I'll be in a suit, hopefully in formation with my brothers and sisters from the 28.

I'm not sure if there's a heaven.  And I'm not going to say that it was her time to go, because that's a lie.  But I will say that I'll never forget her.  And she is an important piece of one of the most amazing puzzles I've ever encountered in my whole life.  I love you Natalie.  I love you George and your three beautiful kids.  Many of the people in this photo would do anything for you, myself included.  Just say the word. Fare well Natalie. 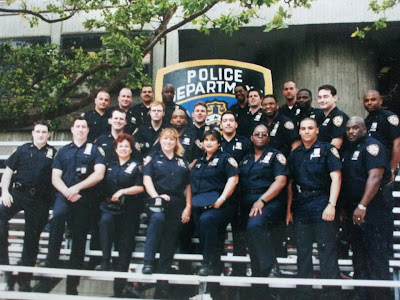 This is a great blog. Thanks for putting it together brother.

Anytime Moose. Thanks for the nice words.

Beautiful Graham. When I look at the group pic I think about the end of Titanic when the girl dies, she goes back to the ship surrounded by everyone she knew there... probably because this ragtag gaggle are the people I want to see in my Heaven and partly because we used to joke - what's the difference between the Titanic and the 28? The Titanic had a band

I have been friends with George since we were 5 years old. I had the pleasure of meeting Natalie at a BBQ last summer. She fit right into our group immediatley and we were all looking forward to doing it again this summer. She will be missed by everyone who knows her even the people who only knew her a short time.

Good to have met you today, Graham. Thank you for having written this tribute.

"Ain't no motherfucker better than the 2-8." You know this.