When I arrived at the 28th Precinct in February of 2000, fresh out of the NYPD Academy, I remember walking into the locker room and on almost every single one was a faded sticker that said "Remember Cardillo."  It was a powerful and quiet statement that something terrible happened and was now part of the building's DNA.  And that feeling was right.  A horrible injustice occurred that practically no one knows about. 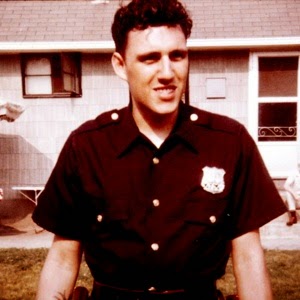 This is Patrolman Philip Cardillo.  He served with the NYPD for 5 years and was 31 years old when he was murdered.  He was survived by his wife, and his three young children.  I use the term murdered and not died or killed, because the incident that took his life was pre-meditated but sadly not as shocking as what followed it.

On Thursday, April 20th, 1972, NYPD Communications received a 911 call of Officer Needing Assistance inside Harlem Mosque Number 7, headed by Louis Farrakhan, and helmed by Malcolm X for a time.  The call actually just gave the address, not mentioning the mosque.  Cardillo and his partner ran inside along with two other officers.

I want to pause the story here and try and give some perspective.  While Fox News recently made much hay of the New Black Panther Party suppressing votes using one guy in a kufi, it's important to remember the early 70's would have made the anchors on Fox's head explode.  The Black Liberation Army had shot 6 NYPD officers in the 10 months leading up to the call that Cardillo got, and 4 of the officers had died.  Officers Piagentini and Jones were killed in May of 1971 in an ambush outside the precinct just above Cardillo's.  Officers Laurie and Foster were killed in Greenwich Village, shot in the back while they walked to their foot beat.

The NYPD Patrol Guide still instructs officers to space out when leaving the precinct to get your patrol cars, which was protocol to limit the amount of officers that could be killed in one ambush.  So there was a war going on in Southeast Asia and a war on the streets of New York.  This was not just a NYC phenomenon either.  13 years after this in Philadelphia, police dropped a bomb on a rowhouse to break a siege and arrest members of the MOVE Group.  Just think about that happening now.  Seriously.  Stop and just process that. A police helicopter dropping a bomb in a city neighborhood.  Alright, unpause.

So Cardillo and the other three officers were inside the mosque a crowd formed outside blocking other officers from assisting them.  Three of the officers were able to escape but Cardillo was trapped behind a gate that was closed to trap him.  He overpowered by many men and his service weapon was taken from him and he was shot with it.  Officers were able to break back in and rescue the mortally wounded Cardillo.  At this point, the crowd had swelled outside furious that officers, regardless of their skin color, had broken the sanctity of the mosque, or seeing an opportunity to hurt outnumbered police officers.  A riot roiled for three hours.  Requests for buses of recruits to assist went unanswered.  Below is a photo of Detective Randy Jurgensen, who had just been struck in the head with a brick, falling into the arms of the 28 Precinct Commanding Officer Deputy Inspector John Haugh. 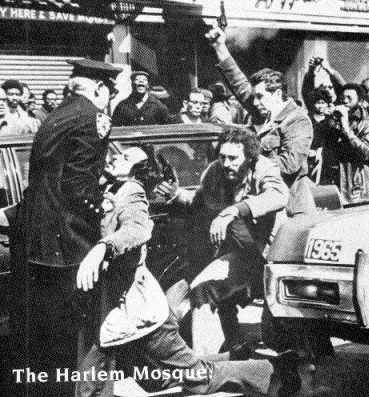 So we have a mortally wounded officer, cops pouring in responding to cries for help on the radio and hundreds of people responding to fight them.  There were 12 suspects in the basement that they were searching to find Cardillo's gun, when Rep. Charles Rangel and Louis Farrakhan come downstairs and order everyone out of the mosque.  Rangel and Farrakhan promised police officials that the men would surrender themselves at the precinct for interviews later that evening.  No one ever showed up.    Deputy Commissioner for Community Affairs Ben Ward, who later became Police Commissioner, ordered all the white officers to leave the scene, to relieve tensions, further destroying morale for all officers, black and white.

I'm going to cut and paste from the excellent blog NYPD Confidential for the follow-up.


Six days later, Cardillo died. He was 32 years old, the father of three. The day of the funeral, his commander, Deputy Inspector John Haugh, resigned in disgust, blaming the NYPD for failing to affirm publicly that Cardillo had acted properly on entering the mosque.

Within days, the department issued written rules for 16 “sensitive locations,” including Nation of Islam Mosque Number 7, forbidding officers from entering such places without a supervisor. It turned out there had been an unwritten agreement with Mosque Number 7.

So strictly did the department interpret these rules that, because of objections from the mosque, ballistics technicians were prevented for the next two years from gathering evidence from Cardillo’s shooting.

It needs to be said that neither the Mayor nor the Police Commissioner attended Cardillo's Funeral.  That day was looked upon as an embarrassment by the Job and all attempts were made to sweep it under the rug.  Thankfully, some have done as the bumper stickers have commanded.  Randy Jurgensen, the same detective who was injured in the photo above, wrote a book called Circle of Six about the incident which is a must read.

No one has ever been convicted for the murder of Philip Cardillo.

The reason this post came up is because recently attempts have been made to one again name the street in front of the 28th  precinct after Cardillo.  This apparently is difficult because of the community and the sensitivity of the incident.  The only thing that happened that day on April 20th, was a NYPD officer was murdered and the city and a department colluded to ensure that his murder was never solved.  I think a street sign is the least, and I mean the very least, it could do.

I know that currently in New York and nationally that there is an anti-cop sentiment.  The recent death of Eric Garner in Staten Island has inflamed simmering tensions that never seem to go cold.  I'm not going to say that all cops are decent people.  Some are even criminals in uniform.  But Philip Cardillo was a son of the city,  just like all the police officers who have been killed doing their duty.  As a nation we are shamed by our handling of returning troops after the Viet Nam war and now we bend over backwards to support our troops as a nation.  We should bend over backwards to correct this injustice.

That faded sticker  on my locker was right.  I will always Remember Cardillo.