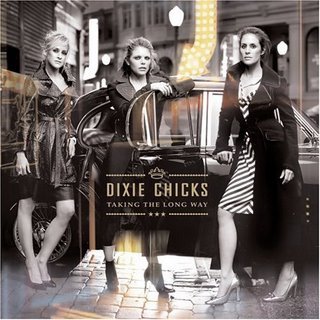 So on Saturday night, I attended the Dixie Chicks concert with Mikie. I asked her if she wanted to fly out for this, mostly because I realized that she would appreciate this ticket more than anyone else I knew. So we had a good time and saw an awesome concert.

Say what you want about these ladies, but they really put themselves in the music. When they performed "Not ready to make nice" which talks about the whole controversy about their Bush remarks, the place went nuts. It was nice to be able to support them, and I love the fact that they came back with a bang and not a whimper. They aren't asking for forgiveness. They're taking it, and changing their fan base to be sure.

If you don't have the album, "Taking the Long Way," buy it and have a good listen. No matter what your politics, it's a great listen.
Posted by Hero to the Masses at 11:46 AM