It is true, Ithaca is Gorges

So this weekend was a busy one.

My high school friends were gathered in Charlottesville, VA to drink and be merry and celebrate the engagement of my friend Waka. He's the guy who does Lunch Box. Or used to do it once paying acting gigs came in. I missed them truly.

However, I had a higher purpose this weekend as I was off with some college friends to Ithaca, NY to gather at a lake house and remember our friend Erin who died in Ithaca 4 years ago. We drank a lot of beer and had some good conversations, which I think is what Erin would have wanted. The drive is about 6 hours from my place and my friend Steve and I started in Marshfield to see my friend Montu's baby, Kieran. Montu took a photo, and I'll caption it before I post it and you tell me if you think I'm dead on."

Steve from Quincy and Graham from Somerville have waited 6 years for this day. Their marriage was the first step on a journey to fatherhood with the adoption of their son Kieran. 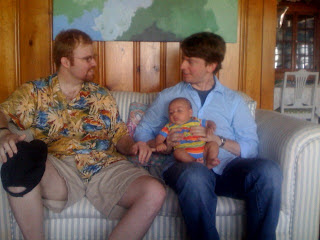 Christ. The funny thing was that Montu's wife was like girls love photos of guys with babies. However, I'm pretty sure this photo won't help on that front. And for the record, I'm holding Kieran's hand.

So Ithaca was great and got to see a 5 college friends who I don't get to see often enough. And we got to have dinner with Erin's parents. They were as happy that we were there as we were to be there, so it worked out well.

I decided I want a digital SLR camera. My friends Kate and Nick had an awesome Nikon and I felt like photographer even though the $700 camera was doing all the work.

That is a terrible photo.

Oh, congrats to Waka! that's exciting! i'm laughing at the photo, caption and subsequent commentary. too funny... you guys look like, emmm, naturals. what happened to that graham in knew who scooped up fatherless children at firehouse bbqs with ease?