I am scared of Beryl 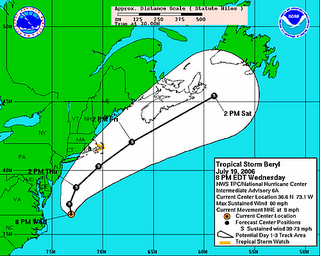 So Tropical Storm Beryl is threatening the east coast, and there remains the possibility that I have to spend the night underground tomorrow night because of it. I really hope this chick doesn't come around. I'm not a woman hater, but I'd rather not spend the night sleeping in a bunker again.

In other news I saw Capote and thought it was okay. I thought Hoffman did a fine job with Capote, but it was more mimicry than acting. I thought the kid who played the prisoner was excellent though.

Oh, and I found out that Larry Hagman went to my high school. How pimp is that?
Posted by Hero to the Masses at 10:32 PM

ok, question somewhat related to your high school comment... why are some schools called "country day"? i.e. Mary Institute Country Day... what are the origins of that name? were they day schools located in the country when they started?

The Country Day School movement is a movement in progressive education which originated in the United States in the late 19th century.

Country Day schools seek to recreate the atmosphere, camaraderie, and character-building aspects of the best college prep boarding schools while allowing students to return to their families at the end of the day. To avoid the crime, pollution, and health problems of the industrial cities of the early 1900s, the schools were sited in the 'country' where wealthy families owned large homes in what would later be known as suburbs.

The Country Day School movement shared many values with the Arts and Crafts movement. School buildings and campus landscaping were designed with the goal of creating an inspirational atmosphere that would foster learning and culture. In keeping with this holistic view of the student learning environment, various "after-school" programs promoted student development, including athletic programs, choir and religious studies, and monitored study time. Students were given opportunities to develop leadership skills through clubs and student organizations.

whoa. did you just look this up on wikipedia or did you write a paper on this in college?

so cool that you answered that. now, quick, ask me something random so that i can answer you and feel smart! ;)

have fun in the bunker tonight.

Where was Jello invented?

HAHA! When I was reading the country day response, I TOTALLY thought, "wikipedia." GO SARA!!! (although, I did love the Arts & Crafts reference... I think my favorite period of American Art History...).