The Weekend of Northern Aggression

So this weekend found me in Greensboro, NC. My friend Sam from high school is celebrating his 30th birthday tomorrow and his wife Lizzie decided to arrange a surprise for him. Well, it turns out that our other friend Waka was going to be down in Greensboro watching the final performance of his girlfriend's show at the regional theater. So we moved the rumpus down there.

But let's begin at the beginning.

I hate Comair. If you don't know what airline this is, they run the smaller planes for Delta, mostly out of the Northeast. One of the reasons I hate them is that they only fly this plane. 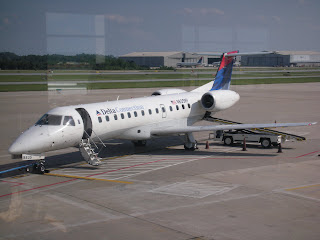 This is the CRJ-200. It seats 50 people. I can't stand up in it, and I had to play some perverse game of Twister to take a leak in the back. This plane is the reason I hate regional jets. The other reason I hate Comair is their on-time departure issue. The issue is they are never on time. My flight from BOS to GSO was on-time 50% the last two months, and it didn't disappoint on Friday. We were an hour and a half late taking off.

I was bummed my friends would have to wait for me at the airport. Not to worry. Their flight was also delayed. And the gigantic Triad Piedmont International Airport (Not sure where they fly that needs a passport) closes down at 8PM (Click here for a documentary of my boredom). Graham got there at around 8PM. Soon, though they arrived and we went to dinner. Fun was had by all.

So Sam arrived, carefully deposited by his wife to find us playing whiffle ball and some of us not wearing pants. One couple had their flight cancelled on Friday afternoon and decided to drive down, arriving Saturday around 4PM after stopping, They later admitted they weren't really sure how far Greensboro was from Baltimore, which might have affected their timing.

Now all assembled, we went to see Miriam's show at the local theater. She was magnificent. I'm sure you probably think I'm biased, so I've included a review. And we ate a lot. I had some Krispy Kremes when the Hot Light came on. Miriam didn't know anything about the hot light. God Bless you Hot Light.

We also ate at this feast of geriatric delights called K&W Cafeterias, where for 10 bucks you can stuff yourself. I had a lot of food, but my faves were the turkey ranch casserole and the toasted coconut pie. God I can hear my heart pumping harder as I type it.

We gave Sam some awesome gifts: Denture cream, reading glasses, Depends, Geritol, and enema kit, Just for Men. All of them were gag gifts, which was the funniest part. At least for us. And then I crammed my big ass back on that small plane and flew home.

I told a bunch of people about going down to NC and then I told them it was for a friend's birthday and they looked at me like I had three heads. "You're going to North Carolina for a birthday?" Of course I was. I love those guys, and now I've come to love the women they found. They represent the best parts of me. There is nowhere I wouldn't travel for them and nothing I wouldn't do for them. In a lot of ways, the love I feel for them is as deep as the love I have for my brother. It just feels right when I'm with them.

And they are super fun to be around.

This means that BBQ place is not in Lexington, MA, right?

Dammit. I was looking forward to trying a new BBQ place next time I was around the burbs.

Negative. Now, this place might be the Barbeque capitol of NC, which means you're still in luck. Though I would still argue that NC barbeque is better than MA barbeque.

Any bbq south of the Mason-Dixon line is innately superior to its northern counterparts. And I say that as an uptight Yankee.

Now I may be biased but I think that the closest thing you can get to SOUTHERN BBQ is a place called Brother Jimmies. . . . HA, JUST KIDDING.