So I was in sunny Buffalo, NY this past Saturday for my good friend's wedding. If you are unfamiliar with the City of Buffalo, here is the highlight reel:
Buffalo is like the Detroit of the Northeast. I am staying at the Hyatt, which is the largest hotel in the city. It's a little long in the tooth, and in their defense they are starting a guest room renovation campaign. But the hotel doesn't have to, nor does it, try that hard. The Pittsburgh Penguins stayed here last night. Fox Sports is here for the Bills game tomorrow. They basically have the market as no other major chain is going to build a new large hotel here with the amenities.

I'm currently paying 12 bucks for a sandwich at the hotel bar, which annoys me being that I'm frugal. On the upside, it's Beef on Weck, which is a Buffalo specialty. The bread is kimmelweck, a German bread that has salt on it and is quite tasty. So I take solace in the fact that's it is a good sandwich.

You might be asking yourself, "Why the hell are you eating in the hotel bar? Go out and help the local economy. I was an urban studies major in college, so I believe deeply in helping urban centers. However, when I walk outside the hotel this is what I see: 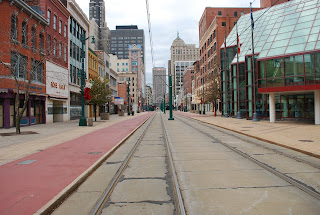 This is Main St. They apparently closed it to vehicular traffic years ago and installed a light rail. This is a decent idea when you have a really bustling downtown and parking is an issue. In Buffalo however, parking is not an issue. And as the City of Poughkeepsie found out, when you have a pedestrian mall that is sparsely visited, people stay away. A lack of people on the streets doesn't seem safe to most people. There are studies done that show the greater proximity you are to other people, even if they're strangers, the safer you feel. As evidenced by the photo, it looks post-apocalyptic.

I will post more photos in a little bit
Posted by Hero to the Masses at 12:22 PM

Me likes the photo. It reminds me of "I am Legend" I'f it took place in Upstate NY

i totally agree about the lack of people thing-- when i moved to chicago (i know-- stay with me for a sec...)., if i left my office (in the loop) past 7 p.m., it was dead-- no people, little traffic... i thought i was going to get mugged. i didn't (in case you were wondering), but i always felt safe on a crowded nyc subway at 1 a.m., but never on a barren chicago street at 7.