So I'm back home and even had time to finish John Adams and do laundry. 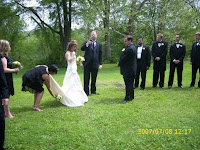 On Saturday I married my two friends Alex and Heather. I should clarify that I officiated, as someone always gets the wrong idea, Utah-style. It was a nice outdoor affair, and the weather held up, as you can see from this photo. Funny story. My tuxedo cost $99 from K&G. My shirt and braces cost double that from Nordstroms. However, when I went to put my jacket on, I noticed both the buttons were missing, so I just removed the excess string and called it a "European cut." No one seemed to notice.

After the wedding, people went into Philly for an evening of drinking, talking and laughing. The hotel I was staying at was having a huge Jewish wedding on Saturday night. On the way back to change out of my European tux into more casual clothes, I stopped in on their cocktail hour. I was there long enough the grab a rum and coke and a few pigs in a blanket. Who knew the chosen people and I shared a favorite appetizer. This was the first time I've ever crashed a wedding, but I had this whole back story. I was dating this girl named Sarah Green who went to college with the bride, but I didn't know where that was because this was only our second date. Etc...

This morning saw me up for brunch with my friend Nicole and her friend. And then a 6 hour drive. But the 6 hours were clearly worth it because I had two chili dogs from this heavenly establishment. I paid for it, but it was totally worth it.

I had a good time at the wedding and it proved my hypothesis that weddings can be incredible or mediocre. At their best, like this one was, it brought together great friends who in turn met other people's great friends and new friendships were formed. This one guy and I hit it off incredibly well and I am going to look him up when I'm down in NYC. His brother is a cop and he's insanely funny, so it was a match from the start. But I really enjoyed meeting all of their friends and sincerely do hope that I get to see many of them again.

There's that saying that you can never have enough friends. I think that is true until you get to the point where so many friendships are hard to maintain which becomes the limiting factor. Facebook can act as a force multiplier, but it's not real. I will say you can never have enough great evenings of conversation, laughter and fellowship. Regardless of what happens going forward with these folks, I will always have that.