So I've been watching the news and following Twitter about the storm, and the stories are incredible.  The 6-alarm blaze that claimed over 50 houses in Breezy Point was particularly poignant because the photos didn't show water, but ash.  And the story of the hundreds of hospital employees and first responders who helped evacuate NYU Langone Medical Center by carrying adults and children down stairs and breathing for them using bag-valve masks, otherwise known as "bagging".

And there's tons of You Tube videos of people in Lower Manhattan astonished at the water flowing by their apartments.  I understand that it's not normal to see water pushing cars down 2nd Avenue, but its possible.  I looked up the SLOSH maps for part of NYC.  Slosh stands for Sea, Lake, Overland Surge due to Hurricanes and happens along all borders with lakes and other bodies of water. 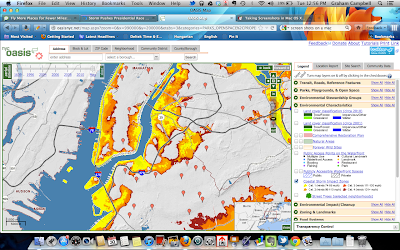 So the  yellow on the map is the surge from a Cat 1 storm, which is essentially what Sandy was.  Basically the storm is pushing the water onto land, but as the seafloor rises to meet the coast, that water has no place to go and gets pushed up into a larger wall of water.  This is why you can see surge heights of 3-5 feet easily.  Here's a great animation from the National Weather Service.

Also, people seem to be shocked that the subway might stay closed for a week.  The subway is underground and runs on electricity.  These are two things that don't respond well to flooding.  There are currently 7 tunnels under the East River that are flooded, which will take time to pump out.  Even once all of the tracks are pumped out, they still need to determine what the state of the wiring is.  Juction boxes and track signals aren't meant to be underwater.  So give it some time.  Join the old people and get reacquainted with the joys of busing.

New York City will bounce back from this, because it is a vibrant and resilient place that imparts its citizens with an attitude that doesn't take crap and makes the best of bad situations.  The message here is that this is nature and science and it doesn't care that you're not prepared or that your apartment is on the 28th floor.  If you have a heart attack, because you eat fatty foods, the EMTs will need to walk up 28 flights to get you.  And you'll be dead.

As a born and raised New Yorker, my heart aches to see the city in harm.  But I also know that in this time of need, there are amazing acts of selflessness and heroism, like I saw during 9/11. Be safe, but more importantly, be aware.  I'm sure though that this storm has brought plenty of awareness for everyone.