The opposite of Katrina

So I'm watching the media freak out as they have to decide between their specials on the year anniversary of Katrina, or the 5-year anniversary of 9/11. Only so many hour long specials to film. Tough choices. There was one on the Discovery Channel tonight about Katrina. They had too much water down there. I face the opposite problem. 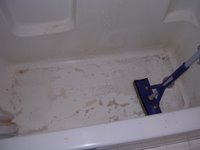 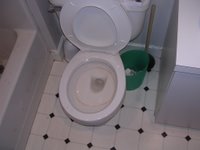 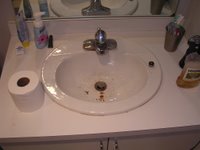 So this is my bathroom. And no, I'm not a slob. The water shut off around 2PM today. My landlord told me it must be the city's fault. So the City of Somerville sent a nice guy over from the Water Department over at triple time on Sunday. He told me it was the building's issue and they needed to call a plumber. He was right. However, the shady landlord isn't really returning our calls.

So I'm doing all the cool stuff, like gravity flushing my toilet with the one source of water I do have, my kitchen sink. I shaved at that sink about 10 minutes ago, using the side of a pot as a mirror. I feel like a pioneer. Except I have the internet and a bed. It's just the water thing. Oh, the Subway near Porter Square has a lovely bathroom. (I mean the sandwich place, and not the T.)

I'll keep you updated as I'm sure you're all curious. Thank God that work has showers.


Update: I have clean water and all the fixin's. Thank you lazy landlord. Oh, and my roommate found the plumber playing darts on our board in the apartment.
Posted by Hero to the Masses at 11:00 PM

How's it going? Do you have water rations? Has your slumlord fixed it yet? Or are you too unwashed and stinky to deal with trifles like blogs?
~Tory