So my flight landed safely in Dulles. Thanks United. They are the only airline that lets you listen to air traffic control, which I always find interesting. (I know. I'm a dork.) But that channel was silent, I'm thinking due to the latest terror threat. Ah well, I didn't think that perk would last long.

Dulles should not be allowed to have Washington D.C. in the title. It's like 30 miles away. And they use these crazy buses to get you from one terminal to another. 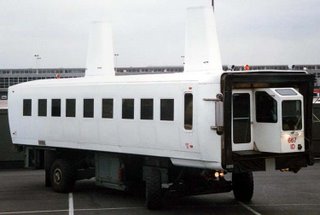 Apparently they are coming into the 1970's and building a train system between terminals. Good. Because as much as the Jetsons thing is cool, it's not when you're running late to a flight.

So I landed and decided to get a rental car. Mostly because I'm hoping to see friends and when I asked the hotel how to get to D.C. from there, they gave two options.So basically, there's no way in hell I'd do either of these. So I found a decent rate on Avis and booked an intermediate. And this is the chariot that awaited me in spot D13. 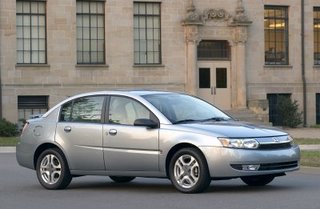 This is the Saturn Ion. It is no Lincoln Towncar I tell you. It's not even fun. And it feels cheap, apparently plastic was the premium interior option. Unless you're 17, don't buy this car. If I wasn't paying for the rental, I wouldn't have this car.

So here I am at the Holiday Inn - Dulles Airport. They bill themselves as one of the finest hotels in Washington. I wonder if they could be sued for libel. If anyone is around and wants to hang out, call me. Oh and this place wasn't bad for lunch. Good turkey club.
Posted by Hero to the Masses at 3:25 PM

I hate United Airlines. As in I HATE UNITED AIRLINES. It's the worst U.S. domestic airline as far as I'm concerned. I started to write a blog about it, but then couldn't be bothered. That's how much they suck.

As for the rental car experience: AWESOME. Saturns. Didn't even realize they'd made it to the rental market.