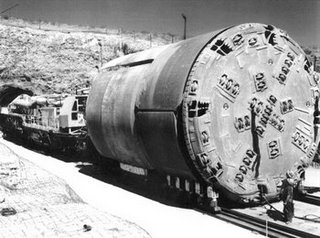 During the Big Dig, two tunnel boring machines (TBM) helped to dig out the tunnel that would eventually become I-93. They started on each end with the goal to meet in the middle, much like this fine event. I learned tonight from a well-placed source that the machines dug to within 100 feet of each other. Hand tools were then used to finish the tunnel. But the machines then both made right turns into the sides of the tunnel and were buried there.

So I'm not sure what the cost of one of those machines is, but I'm guessing $20 million maybe? And all because they didn't have a reverse gear. Much like this expensive toy currently.
Posted by Hero to the Masses at 11:36 PM

so, let's go dig up that bad boy and sell it on ebay!

i'm sure kim jong il would be interested in buying such a toy.

holy crap. and people wonder why the big dig cost so much money.

Were they really buried? I mean with all the graft skimmed from the Big Dig, I wouldn't be surprised if those two borers just sort "fell off the truck."

If you know what I mean.