Let's do some aerobics! 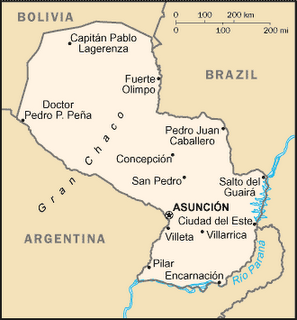 So I found out last week that I might be going to Paraguay for two weeks in late November. That place is not to be confused with this movie, which I first thought about.

But lemme start from the beginning as this is kind of cool. So the National Guard has a sister country program in each state. Our sister country for Massachusetts is Paraguay. I only vaguely knew this as there were officials from that country visiting my agency in June. They met with the Director and a few other senior people. Anyway, so I guess they called up the Mass National Guard and asked for technical assistance with putting together an emergency management program for their nation. They liked what they saw/heard in June I guess.

They asked me to be one of them.

I'm still not sure if there is a much more qualified Graham Crampbell in my agency who I just haven't met. So it would be for about 10 days - 2 weeks. Late November to early December. If you don't know anything about the nation of Paraguay, here is some info. The CIA version is here. A little trivia.... They apparently have the largest navy of any landlocked country. And kidnapping of foreign nationals is a lucrative business.

As to that last point, I'm hoping that the Massachusetts procurement/purchasing process is so convoluted and complicated as to dissuade would be banditos. I do have to fill out a form called the ISO PREP form, which is an army form. It asks you things like boot size, blood type. My favorite is the personal statements, of which there are 4. You need to put things in there, so that if you get captured, they can verify your identity. I kind of like the idea of Navy Seals busting into the hut I'm being held in and looking me point blank in the face and yelling "Over what summer were you a tour guide on a double decker bus?"

I'll write more....thirsty bloodsuckers.
Posted by Hero to the Masses at 8:47 AM

One of my favorite closers in baseball is Uruguayan Ugueth Urbina, who plays for the memory of his father, who was killed by banditos. After that, his mother was kidnapped and he paid to get her released. Currently he's been imprisoned (and judiciary officials have called his mother asking for a bribe to free him) because of his alleged involvement in attacking some ranch hands using machetes and lighter fluid.

Though that's Uruguay, the tougher 'guay, so you'll probably be fine.

Also, I'd recommend sending out the RFP for ransom, and before the new state budget is finalized, if you want any shot of getting out before Christmas.

ps - i heard the reason that they were sending you and the other guy was because you two were the most expendable resources at mema. nor worries though, just a rumor, i'm sure.

Hey, just don't crap in your drawers when the SEALS come knocking down the door and throwing flash bangs around......and remember to fall to the ground...stay low...oh and don't drink the water....

oh yeah, and typically registering at the embassy is for the 19 year old girls on JYA, but dude, register at the embassy. totally. or the SEALS will never come to airlift you out of the embassy roof on CNN.

Make sure your Kidnapping and Ransom insurance is up to date.

Dude, I'd totally fill out a P.O. to kidnap your ass.