I can't believe it's Sunday night

So this weekend has come and gone quite quickly. Saturday was a good time, and I spent it with Chuck out in Western Mass. We went to the Springfield Armory, which is where John Garand created the M1, which protected our boys in World War 2. Then last night, I went to Target and bought an Xbox 360 from Target. 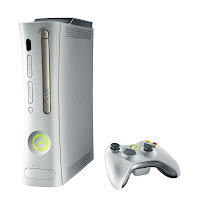 Good Stuff. Played it some last night and a little bit today for a study break. Had people over for the Super Bowl. Chuck and his lovely wife Sara, Steve, and Amanda were kind enough to join me for the game. Chuck brought a lot of food, and broke the cover to his crockpot on my icy steps. Sorry dude, but what real man carries a crockpot? Your barbeque cocktail wieners were delicious though. The game sucked, as did the ads. About the only thing I enjoyed more than watching Rex Grossman suck like it was his job, was watching all of those CEOs and rich kids get soaked in the rain.

I can't believe it's Sunday night. Man, the weekend went fast.
Posted by Hero to the Masses at 11:18 PM

Only a real man is comfortable enough with himself to carry a crockpot. Besides, men who cook are hot.
Such blatant sexism is disappointing, Cracker. Did Vassar teach you nothing?

I'm sorry. I'm sure there are real men that carry crockpots. Not the one who slipped on the ice in front of my house though.

Chuck is obviously a giant slab of Grade A USDA Choice Mayun. You're just jealous of his crockpot.

Anyway, I had a perfectly lovely time watching the Super Bowl up in your crib. Thanks for havin' me over.