Even voting is different up here 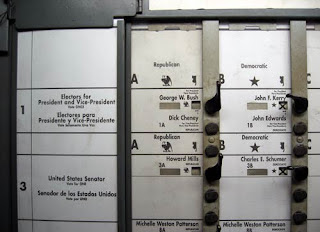 So today is Super Tuesday and I just went down the street to cast my vote. This is not going to be a post about Vote or Die or how thousands of Americans have died so that we can all have the right to vote. I think people should vote, but I'm not going to preach.

However, I miss the NYC voting machines. They are these giant metal beasts with levers and knobs. It makes voting fun. You turn the knob for your candidate and then to cast your vote and clear the board, you move this giant lever on the floor. It feels satisying. As if you're actually sending your vote hurtling towards the Board of Elections.

In Somerville, they have a paper ballot with the candidates names. And there's broken arrows next to each of them. So you fill in the arrow. I was skeptical to say the least, and unlike the machine, I kept peeking at the ballot to make sure the right arrow was connected. And then you feed it into a machine and it beeps and you're done. That's it. Not satisfying "Ka-chunk" as the lever slides forward. You sort of wonder if you voted at all. However, I did get a sticker that says "I voted today." And that's gotta be worth something. 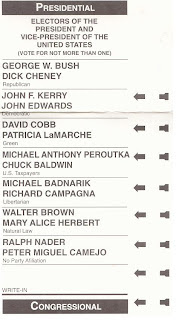 I didn't get a sticker! Of course, it was raining out, so there wasn't really any place to attach the sticker from which it wouldn't immediately slough off, but I wanted a sticker.