Thank God for the DVD 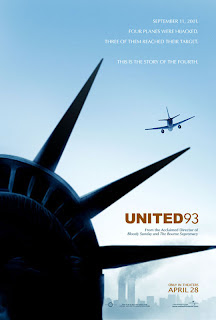 So I put the film United 93 in my Netflix queue a long time ago and eventually it came to my mailbox. I wanted to see this movie, not so much for what happened on the actual flight, for I knew that there was a lot of speculation. Rather I wanted to see the ground side of the drama, between the air traffic controllers and the military.

So I'm watching it now, and I can't get through more than 15-20 minutes at a time. The hijackers haven't even taken the plane, but they are about to. I could hear my heart beating as I watched it. I wonder if this takes something away from the experience. Maybe I should just sit through it and watch the whole thing uninterrupted. I'm not sure I could have stayed in the theater.

I guess I thought that because this wasn't directly about New York City and the Twin Towers that it would be easier to watch. I was wrong. I'm not sure it's a bad thing. I mean I appreciate movies that affect (or effect?) me. This however does more than that. It grabs me and throws me around the room. If I had more than soup today, I'd probably feel a little queasy.

Anyone see it? Am I a coward for not watching it all in one sitting as the Director intended?

Image courtesy of blogs.indiewire.com
Posted by Hero to the Masses at 6:03 PM

I don't blame you at all-- I can't watch that stuff... I don't know if it's too close, or if the dramatazation of it cheapens it, or if maybe it's just the fact that I couldn't sit through the documentaries about it either... I think especially when you were in the position you were in, and saw what you saw, the emotional tax is too great.

There are two schools of thought on this that I encountered when I moved to Philly. I had one co-worker insist that everyone go see this movie so that we, as a nation, never forget.

Many people, such as yourself, don't need a film to be reminded. I explained to this coworker that I had a friend on United 175 and that I was in no danger of forgetting.

I think that's the movement. Lots of people think of films/documentaries like that sort of archival and necessary.

I guess the question is this, though 'you' don't really need the reminder, is it something you'd show your children one day, to help them understand? If so, I think it's served its purpose.

I think it is important that people understand what happened. I think the harder thing will be expecting the same impact. Much like watching video and seeing photos of people sobbing after Kennedy died, I think the future generations might see 9/11 with the detatchment that I view 11/22/1963.

It's not their fault of course. I wonder though what I will feel if they seem not as affected. Perhaps it's something you teach your kids about, but let them feel the way they will feel. Without trying to force the "sadness" on them.

now I want to see!