So last night, I went to a Boston Celtics game, courtesy of Big Brothers of Massachusetts Bay. The tickets were free, but parking was $23.00. Even with comp tickets, the Celtics weren't worth it.

The seats were really high. I mean, like so high that the fan camera than pans the audience was below us and therefore unable to see our section. I actually saw one player yawn during the pre-game warmups, which I felt was oddly appropriate for this team. The place was half-full and why shouldn't it be. They're second to last in their conference, with a 12-22 record. And even with that record, they're only 3 games back from the first place team.

I realized something about the NBA. It's all about the kids. That place was packed with kids on a school night. Why? Because the kids don't realize how much the Celtics suck. They don't understand that their Dad or Mom paid $50 for their seat. They don't really care if the team loses, because it's loud, there's always something going on, and they're probably up past their bedtime. This is the Celtics target demographic. Children under 12 and people who can't grasp how poor the team they're watching is. And certainly people who don't remember this guy....

The only bright spot of the evening was the Celtics Dancers. 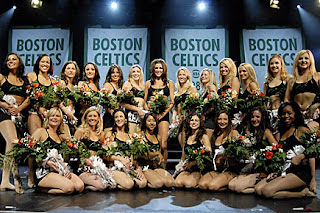 It was good fun to watch these women come out in their quite skimpy outfits during the timeouts. The fathers all seemed to perk up as these women danced with moves that could only be reproduced in a strip club. All in the name of family entertainment. Three of the Celtics girls are in the running to be the Celtics rep for the NBA dance team. I personally want Allison to win.
Posted by Hero to the Masses at 9:56 AM

I spent way more time than I should have on the Celtics Dancer site.

Luckily our IT department is loaded with men, many of which I go to happy hour with, so if they go checking my web history they're likely to just thank me for the link.