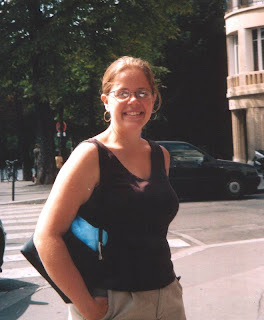 I would like to spend a little time tonight talking about my friend Erin. Erin Aljoe Schlather was my first girlfriend in college. Hell, she was really my first girlfriend ever. We dated for about 3 months, and she was more mature than I by leaps and bounds. Even as a freshman, she was a young woman, while I was seemingly an older boy. So that relationship ended rather quickly, as I kept making promises that my young self could in no way keep.

Erin then became my friend. A good friend. She had this incredible ability to listen, and listen like there was no one else in the world but you and her. It was so wonderful to see that level of interest in her eyes when she was talking to you. I think of her every time I think I'm being sneaky and checking my watch or looking at the person behind the one who's speaking.

And her laugh. It was this great high-pitched giggle that seemed to make everything seem silly. It was the same giggle she'd give along with this look that said, "You didn't really do that, did you? Seriously? Dumb boy." She was genuinely happy for you when things went right. There was no trace of jealousy or envy. She was just an incredible person.

She fell asleep while driving her car home three years ago, and her car flipped over the embankment and landed top-down in a stream and she died. I can't seem to believe that she's gone. And much like how I kick myself because it's hard to notice the Towers missing from the downtown NYC skyline, I find myself worrying about being hyper-vigilant about forgetting about her. That was dumb.

Erin has this wonderful way of popping into my head randomly. And I feel that she really is watching over me, and that in some ways I am a direct extension of her memory. I'm not drinking tonight, but when I next open a beer, I will pour a little out for her. I know she'd like that.

Good night Erin, wherever you are.
Posted by Hero to the Masses at 11:15 PM

I still miss her. Tuesday was hard.

What I do is take her with me. I have a necklace she gave me when I graduated from college, and I wear it on days that are important or beautiful or scare me. If I include her in my thoughts and heart then she's not entirely gone.

And I will quote you back to you, Cracker: instead of me being pissed off that she's no longer in the world, I try to remember that the world is better for her having been in it.

And I am better for having known her. What a blessing, that sweet sparkly girl.

I do the some of the same things that Tory does. I have some earrings that her parents gave me when we were cleaning out her DC apartment - beautiful lapis earrings that brought out her amazing eyes. I always get compliments for them.

We graduated from law school this year without her (though she would have gone full-time and finished a year earlier.) I thought of laugh often as we sat through a really unfortunate graduation speaker (I could almost hear Erin tee-heeing), one of the most off-key renditions of the national anthem I have yet heard, and the calling of our names.

I have been thinking of what she would have done with herself after school and regret that we didn't get more time with her.

But you are so right - the fortune is in having known her at all.