Beer of the Week

I've decided to introduce a feature called Beer of the Week. Basically, each week I'm going to buy a six-pack of a microbrew and try it out. You are free to follow along at home. I'd offer you a beer from my house, but I have two left and I bought the six-pack at 6:30. The store is awesome, and close by. So this week, my beer is: 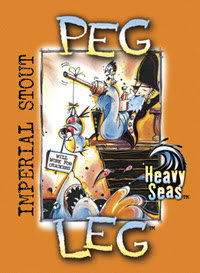 Were this a normal beer review, I probably would have gone with a summer ale variation or a hefeweisen. However, I'm not normal. Just ask my shrink. So I went with a stout. Which for the non-beer fans....is like a Guinness. A little darker and meatier than a porter, which I also like. This beer was good. Smooth, and light. A little chocolaty. But very drinkable. Read the part above where it says we have 4 beers left.

Graham gives it a 87. Beer Advocate isn't entirely as kind.
Posted by Hero to the Masses at 10:37 PM

Email ThisBlogThis!Share to TwitterShare to FacebookShare to Pinterest
Labels: Beer of the Week